AFT Trenchers Ltd. has been making specialist trenching equipment for nearly forty years. Originally all machines were self propelled: smaller trenchers on wheels and larger types as ride-on models with tracks. 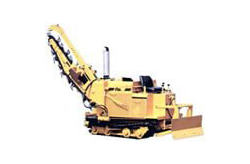 In the 1970s a small wheel trencher was manufactured, which was propelled forward by means of a winch cable. These machines were originally developed for the British Railways and once started, they could work alongside a railway line without any staff nearby so train traffic did not have to be interrupted. The winch also made it possible for these trenchers to climb steep railway embankments. Of the two models made, more than a thousand were produced. They also were very popular for laying electrical cables, notably for motorway illumination.

The following major development in the early 1980s was the AFT65, our first tractor mounted trencher. Trenching needs a relatively low forward speed, but those times, tractors with creeper gearboxes were not readily available. The solution was to incorporate a drive system into the trencher. 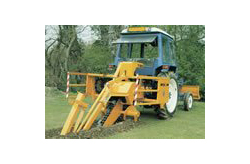 Hydraulically operated cage wheels pressed against the rear tyres of the tractor to move it slowly forward. The tractor, used in neutral gear, provided power to the chain via the PTO shaft. Large numbers of AFT65s were sold worldwide for agricultural drainage and for the laying of pipes and cables. It received the prestigious Gold Award at the Royal Agricultural Show in 1983. The AFT65 has long been superseded by our AFT100, which is still today our best seller.

In the 1980s a new demand grew for sportsturf drainage. Existing machinery was too heavy to operate on delicate grass surfaces and, because all worked with augers which put the soil next to the trench, extensive clean-up work was necessary. First attempts were made by fitting a conveyor system to the small winch propelled trenchers. Though many were sold, it still did not offer an ideal solution. 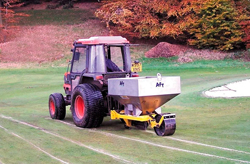 A major breakthrough was the introduction of the WizzWheel in 1985. This wheel trencher is still in production today and is most widely used by sportsturf contractors all over the world.It soon was followed by the AFT100 chain trencher and later by the AFT45 trencher for compact tractors.

The AFT45, which can be fitted with a digging chain or with a slitting wheel, can be used with augers or with a conveyor system. It has enabled green keepers to do drainage work themselves as and when they need to and with minimal disruption to play.

Though specialist sportsturf trenchers are a significant proportion of business in the year 2000, there was a renewed focus on the agricultural and civil engineering sectors. The revolutionary MH100 trencher was developed for excavators and is widely used for the installation of pipes and cables in conditions where conventional trenching machines cannot operate. The AFT100 was upgraded to include a heavy duty civil digging boom, which lead to civil and cabling contractors using the AFT100 for fiber optic cabling, water pipes and varied civil works.

To cope with business growth AFT Trenchers Limited moved in 2003 to new premises and already three years later these had to be extended to keep up with the ever increasing demand for our trenchers and other drainage machinery.

Then in 2015, again due to significant growth, a decision was taken to relocate our business into one purpose built building to enhance productivity and effectiveness.

Throughout its existence, AFT has built an excellent reputation for the quality of its machines, the quick and reliable supply of spares and unequalled service to its many customers. 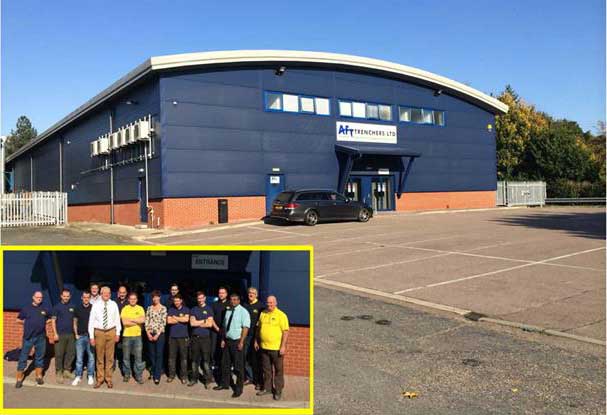 This website uses cookies to improve your experience. We'll assume you're ok with this, but you can opt-out if you wish.Accept Reject
Manage consent

This website uses cookies to improve your experience while you navigate through the website. Out of these, the cookies that are categorized as necessary are stored on your browser as they are essential for the working of basic functionalities of the website. We also use third-party cookies that help us analyze and understand how you use this website. These cookies will be stored in your browser only with your consent. You also have the option to opt-out of these cookies. But opting out of some of these cookies may affect your browsing experience.
Necessary Always Enabled
Necessary cookies are absolutely essential for the website to function properly. These cookies ensure basic functionalities and security features of the website, anonymously.
Functional
Functional cookies help to perform certain functionalities like sharing the content of the website on social media platforms, collect feedbacks, and other third-party features.
Performance
Performance cookies are used to understand and analyze the key performance indexes of the website which helps in delivering a better user experience for the visitors.
Analytics
Analytical cookies are used to understand how visitors interact with the website. These cookies help provide information on metrics the number of visitors, bounce rate, traffic source, etc.
Advertisement
Advertisement cookies are used to provide visitors with relevant ads and marketing campaigns. These cookies track visitors across websites and collect information to provide customized ads.
Others
Other uncategorized cookies are those that are being analyzed and have not been classified into a category as yet.
SAVE & ACCEPT